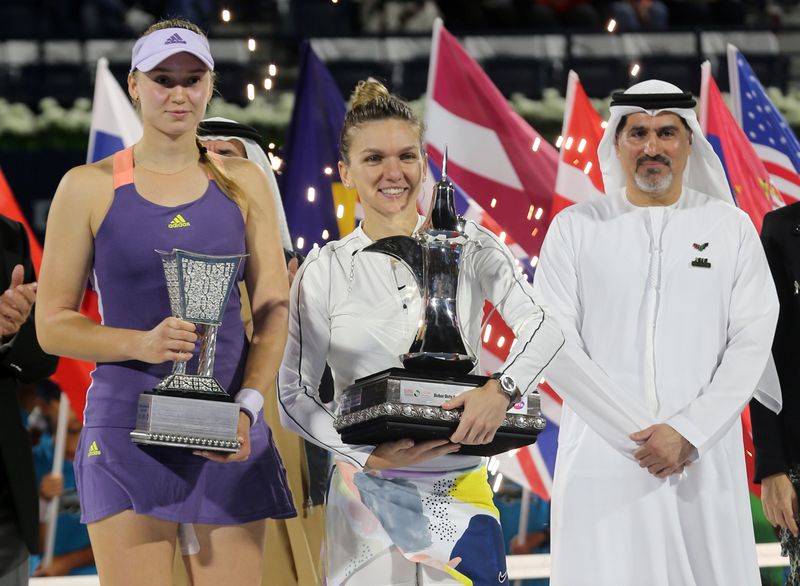 (Reuters) – Top seed Simona Halep came back from a set down for the third time in the tournament to beat Kazakhstan’s rising star Elena Rybakina 3-6 6-3 7-6(5) to win the Dubai Duty Free Tennis Championships for the second time on Saturday.

In a battle that lasted nearly two-and-a-half hours, the match came down to a tiebreak where two shots that went agonizingly wide for Rybakina eventually decided the title in front of a noisy crowd that constantly chanted Halep’s name.

Romanian Halep, who first won the title in Dubai in 2015, and 20-year-old Rybakina had nearly identical numbers with respect to winners and unforced errors, and they both broke each other four times to underline how close the contest was.

Rybakina, playing her fourth final of the season, was unplayable at times before Halep got a foothold in the contest and started controlling points.

“I really want to congratulate Elena, she’s so young and has many years to play at the highest level,” a visibly exhausted but relieved Halep said in her post-match interview.

“I was checking the board to see how fast she served. Sometimes I couldn’t really touch the ball, it was really tough to return.

“I fought hard, I really wanted (to win) this tournament because I love playing here and I gave everything I had. Now I’m actually pretty dead!”

The title was reigning Wimbledon champion Halep’s 20th of her career and the world number two has now extended her stay in the top 10 to 318 weeks — the 10th longest streak in WTA history.