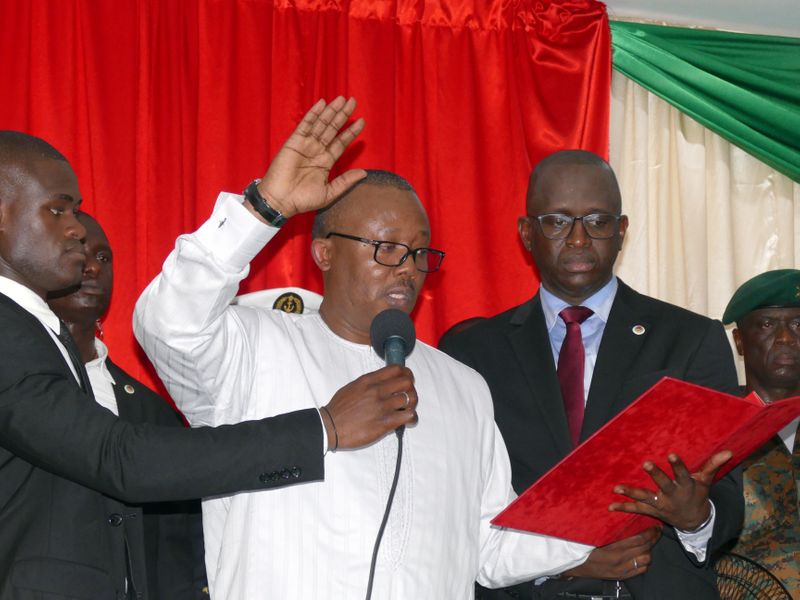 BISSAU (Reuters) – Guinea-Bissau had two presidents and two prime ministers as of Saturday, after Umaro Cissoko Embalo, the inaugurated winner of December’s election, swore in a new premier, but parliament appointed a rival interim president.

The flurry of clashing appointments adds to the confusion that has reigned since the Dec. 29 presidential run-off in the small West African country.

It is unclear how the situation could develop. But the appointments suggest a continuation of the institutional chaos of the past five years, when then-president Jose Mario Vaz cycled through seven different prime ministers during a series of political disputes.

Further instability will weigh on the economy, which despite annual growth of around 5% is already hostage to the volatile price of cashew nuts that are the main income source for over two-thirds of households.

Embalo, whom the electoral commission has repeatedly confirmed as the winner, was sworn in on Thursday.

But the runner-up Domingos Simoes Pereira, whose PAIGC party holds the most seats in parliament, says the inauguration was illegitimate as the Supreme Court was still considering his party’s request to annul the vote over alleged irregularities.

Late on Friday, lawmakers voted to appoint parliament leader Cipriano Cassama as interim president with those in favor arguing that Embalo’s presidency was unlawful.

“As long as the Supreme Court has not made its decision, the PAIGC does not recognize Cissoko (Embalo) as a legitimate president,” deputy leader of parliament Armando Mango said during the session.

The same evening Embalo issued a decree to sack prime minister and PAIGC veteran Aristides Gomes and his government. On Saturday, he swore in former presidential opponent Nuno Nabiam as his new prime minister.

“The country has passed recent years in a state of ungovernability, bad governance and general corruption,” Embalo said during the ceremony in a speech that did not reference his stand-off with parliament.

“Today’s ceremony marks the start of a new era.”

The population is weary of the crisis, but have different views on who is to blame. In central Bissau, student Isidro Teixeira, 30, said Embalo was the rightful president and the electoral commission’s position should be accepted.

However 28-year-old carpenter Romulo Santos said Embalo had been inaugurated too soon: “We are witnessing a coup because the Supreme Court has not yet ruled,” Santos said.